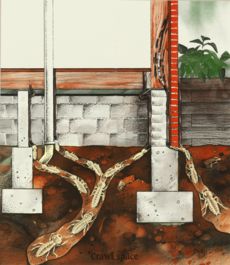 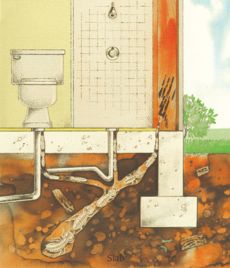 Before deciding on a treatment, it’s important to know the pests you’re dealing with. Admittedly, many people have never even seen a termite. That’s because they stay well hidden. Termites thrive in dark, moist conditions, preferably in soil. On average, they leave their protective environment about once a year for mating purposes -a reproductive process known as “swarming.” After successfully mating, they search for a new location to nest and feed.
Similar to ants, termites live in large interdependent colonies. These colonies operate much like a factory, numbering anywhere from 250,000 to, in some cases, more than one million termites. Worker, soldier and reproductive termites have specific tasks to keep the whole system running. At the center of the colony are the queen and king whose joint purpose is reproduction. The worker termites’ role is crucial; collect enough food to feed the entire colony, including the thousands of new larvae that are hatched each season. Termites feed on cellulose materials and are especially attracted to one particular source: wood. But how do they find it?

An Underground System of Mass Transit

Termites probe through the soil until they come in contact with a food source, a process known as “random foraging.” From there colonies, these foragers can travel as far as 500 feet. Once a food source is located, they build a path to start their system of transporting the food back to the colony. In most cases, termites never expose themselves to light or open area, making their detection during feeding nearly impossible. Even in crossing over non-soil matter such as concrete, they’ll build tubes composed of soil particles to keep themselves protected.

Everything is the in place for a system of mass food transportation. Thousands of termites will travel back and forth from the food source to the next, carrying with them the sustenance the colony needs to survive. Termite colonies work as interdependent units – they all rely on each other for survival. TREATMENT interferes with this instinctive social behavior, contributing to the termites’ demise.